Master Jin Ye welcomes you to the Yinghua Wu Style T’ai Chi Ch’üan school (吴英华太极学校), named in honour of her late grandmother who taught her the theory and practise of the art.  Master Jin Ye is the great-granddaughter of Master Wu Jianquan (also as “Wu Chien Ch’uan” 吴鉴泉), the founder of the Wu Style Tai Chi.

Master Jin Ye has taught T’ai Chi Ch’üan for over 35 years, originally in her home city of Shanghai for over 10 years, and she has been living and teaching Wu Style Tai Chi since 1991 in UK. 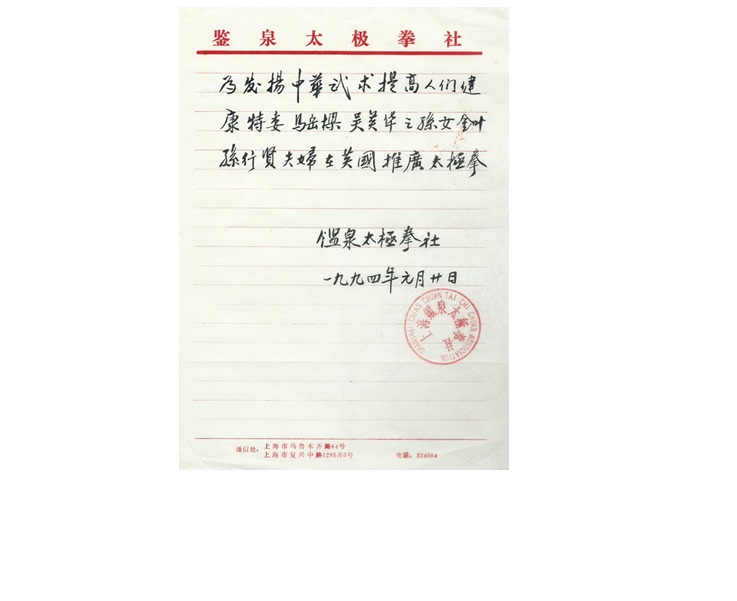 Master Jin Ye is unique in the UK for her insight and knowledge of Wu Style T’ai Chi Ch’üan being the only practitioner to have direct Wu lineage and probably the only teacher in the UK to know the five Wu style double edged sword forms. She started practising T’ai Chi Ch’üan in Shanghai when she was only 10 years old. When she was 16 she started studying the theory with her grandmother, Wu Yinghua, and was teaching in Shanghai by the age of 22. She was trained by her grandparents Master Wu Yinghua(吴英华) and Master Ma Yueliang（马岳樑）for the complete Wu Style weaponry including sabre, spears (twenty four form and thirteen form), and Wu Style Qi Gong forms and pushing hands.

She runs regular classes and seminars in Huddersfield, Barnsley, London, Berlin in Germany and Leiden of Netherlands. She also teaches Wu Style Tai Chi in the UK to students from Spain, Italy, Germany, France, Denmark and South Africa.

She has also trained in medicine originally by her grandfather on her father’s side; a famous Traditional Chinese Medicine (TCM) doctor specialising in Chinese massage and acupuncture in Shanghai China. She learned Medicine from her parents who are both TCM and western medicine doctors. She holds a BSc. in Pharmaceutics, qualified in TCM, massage and acupuncture at the Shanghai International TCM College and obtained her doctorate in pharmacy at Liverpool John Moores University UK.

Certificate (see above picture)
In order to promote Chinese Martial Arts to improve people’s health, it is to delegate Ye Jin, the granddaughter of MA YUELIANG & WU YINGHUA, and her husband XingXian Sun to promote Taichiquan in United Kingdom.